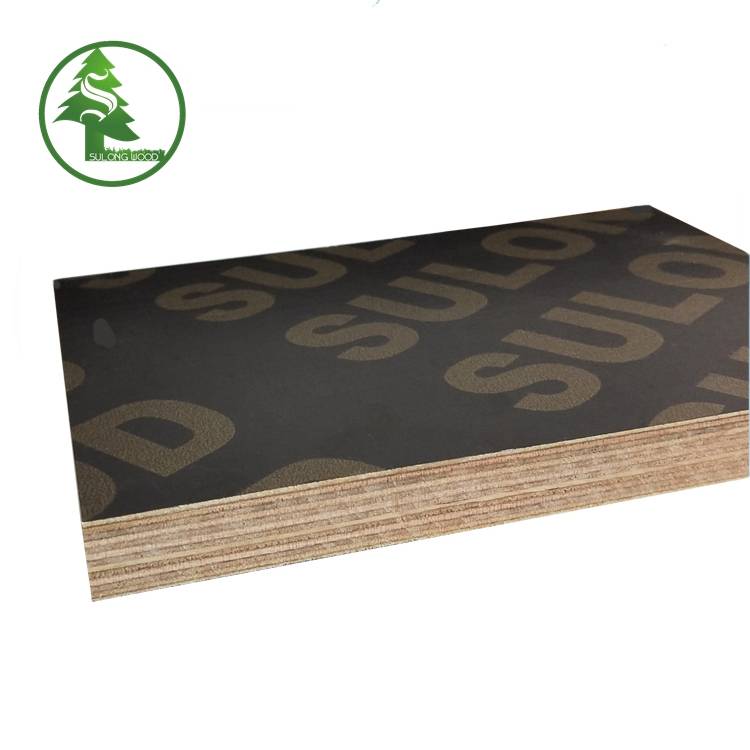 Film-coated plywood Film-coated plywood is also called template plywood, louver plywood, and concrete formwork. Film-coated plywood refers to a special plywood coated with wear-resistant and waterproof films on both sides. It is different from melamine paper-coated, PVC, MDO, Hdo, etc. The film is adhesive impregnated paper, which is different from melamine paper coated film, PVC, MDO and Hdo. The function of the membrane is to protect the interior of the wood from moisture, water, and weather, and to extend the life of the wood. Membrane plywood can be used in harsh external environments: shutter plywood, formwork plywood, concrete formwork, floor board, vehicle manufacturing.

(3). Core material: poplar, hardwood, eucalyptus, birch. Plug in,
70% of the film faced plywood we sell is poplar film faced plywood, with high quality and competitive price. If you need hardwood laminated plywood, we will use hardwood or eucalyptus veneers. If you want to use film-coated plywood to build bridges or tall buildings, you can choose hardwood film-coated plywood, which, as the name suggests, is very hard. We also provide birch laminated plywood, which is also very hard and durable. The plug-in core is the core material after processing and processing of the recycled board. The price is low and the number of uses is small. Customers recommend the corresponding core material according to customer needs.

Sulong Wood is a major manufacturer of film faced plywood in China. We own the brand name SULONG.

Sulong film faced plywood is manufactured with quality veneers with a WBP glue that can withstand harsh weather and rain. Both surfaces of the plywood are coated with a phenolic film overlay and the four edges are sealed with waterproof paint.